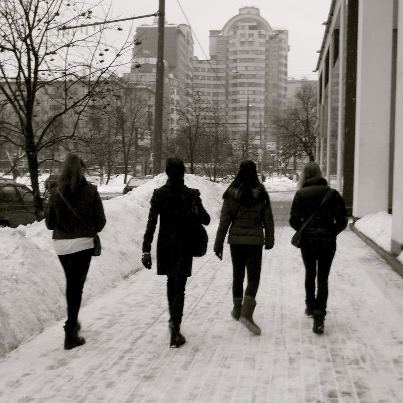 Well, I think I blinked and January 2013 was suddenly at its end. True, the first part of the month was still holiday time, however, once again, the time is just flying by.

I can only put this down to the fact I have stated before, that I’m enjoying working and learning in this lifestyle so much. It didn’t take long at all to readjust myself again, upon my return, and it just feels great to be back into the routine of training here.

I already feel like I’ve improved in this first month back and my class have practiced our solo variations on the Academy stage this week in preparation for the upcoming concert audition in February.

I really enjoyed working on the stage as it put into perspective all the ours we spend in the studio and the end product it all boils down to: performance.

Dancing in a much larger space was a lot more strenuous, plus the stage is raked much steeper than our studio floors (we’ve to watch we don’t fall forwards, down the slope!) but we will practice there more times leading up to audition so hopefully I’ll become more accustomed to it.

Also, I was greatly inspired by a rehearsal I watched at the beginning of this week, taken by  dancer, Africa Guzman, teaching the choreography of Nacho Duato to the the top, third course students. The piece was incredible; I was struck by the way in which dancers would lock themselves together in a complex position, then fall simultaneously into a whole new, interlocking stance. Plus, Africa’s energy was amazing; she created such a positive, creative working environment by her energy. I hope to, one day, dance choreography such as this.

I haven’t had chance to go to the theatre, yet, but the next performance will be Le Corsaire, which I’m determined to see as it’s one of my favourites and also one which I was lucky enough to dance in when American Ballet Theatre came to London, so I can’t wait to see the Bolshoi’s version!

It’s still very cold at the moment and there is lots of snow, however, February will bring a few more hours of daytime and, once March gets underway, it should be noticeably warmer, which I’m looking forwards to!